SOPHIE SCHOLL AND THE WHITE ROSE TOUR IN MUNICH

Our Sophie Scholl tour introduces you to the story of the White Rose, the most famous resistance group in Nazi Germany. Starting at the LMU in Munich you will walk to the most important stations of Sophie Scholl's student life. As the final act, you will experience the last minutes before the Scholl sibling's arrest at the original locations at Lichthof inside the LMU.

Young Sophie Scholl seemed to be a normal Munich student during World War II. But between her hobbies, she was a member of the "White Rose", a resistance group against the Nazi regime. Together with her brother Hand and their friends, Sophie organized acts of resistance. The White Rose became famous for their leaflets, with thousands distributed in the entire south of Germany. Another one of those acts should seal the fates of the students, when they were caught and arrested on February 18th, 1943, inside Munich University. The tour will guide you through Munich-Schwabing to the following destinations:

Professional voice actors in the roles of Sophie Scholl and Professor Kurt Huber will guide you to the most important locations of the White Rose, e.g. the apartment at Franz-Joseph-Straße, which became the center of the White Rose. Experience first hand the last action of the Scholl siblings leading to their arrest. Expect an entertaining and informative tour about the most captivating story of Munich University! 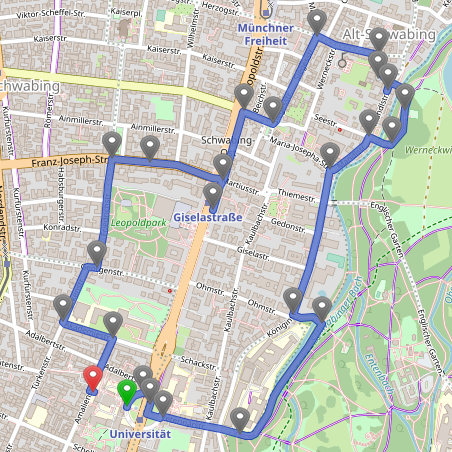 Data from OpenStreetMap. Published under ODbL.

Tips:
- it is highly recommended to take the tour during daytime
– the back entrance of the univeristy is closed on Sundays and holidays, so the tour is only accessible to a limited extent on these days

WHAT OTHER USERS SAY

"Very nice and highly emotional walk with new impressions of the city!"

"Before I walked this tour, I have never paid that much attention to memorials and historic locations. You will also deeply immerse into the roles.
Especially the last action of the White Rose with the following arrest and their original quotes have touched me deeply."

"Varied route with beautiful locations, both popular and unknown. Good mixture, it was interesting to find out more about the private life, the apartments and hobbies of Sophie Scholl. When standing at the locations, you could really imagine everything."

ABOUT SOPHIE SCHOLL AND THE WHITE ROSE 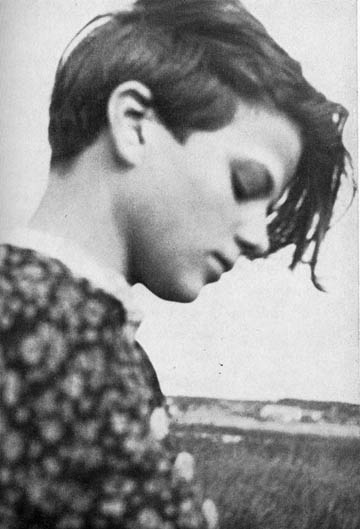 The White Rose was a group of friends, who were mostly students. In June 1942, they started organizing acts of resistance against the Nazi regime in Munich. After the group was started by Hans Scholl and Alexander Schmorell, it quickly expanded by adding Hans Scholl's sister Sophie Scholl, Christoph Probst, Willi Graf and university professor Kurt Huber. There was also wide circle of supporters, sponsors and confidantes.

Center of the protests were a total of 6 leaflets, which were printed more than 10,000 times. First the White Rose sent those leaflets to intelectuals in Munich, later they were also shared in Ulm, Stuttgart, Freiburg, Hamburg, Bonn, Saarbrücken and Chemnitz. At the end of 1943, hundred thousands of leaflets were dropped over Germany by the Royal Air Force. Here the leaflets were called "German Leaflet" and "Manifest of the Munich students". 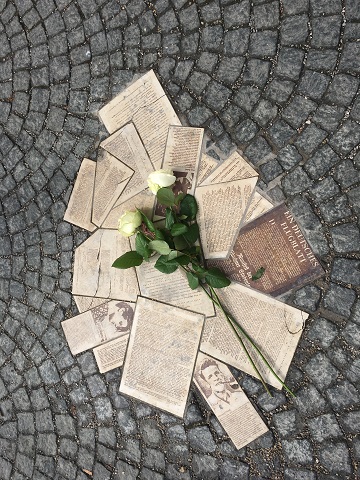 On February 18th, 1943, Sophie and Hans Scholl were caught and arrested during a protest action at Lichthof. After being interrogated for hours and sentenced to death in a short trial, the two siblings were executed on February 22nd, 1943. The other members of the White Rose's inner circle were also found and executed.

Up until today, the members of the White Rose are remembered all over Germany. Many schools and streets were named after the members. Especially in Munich and around the LMU there are various memorials. The DenkStätte Weiße Rose inside the LMU also presents a huge exhibition with everything you need to know about the White Rose.